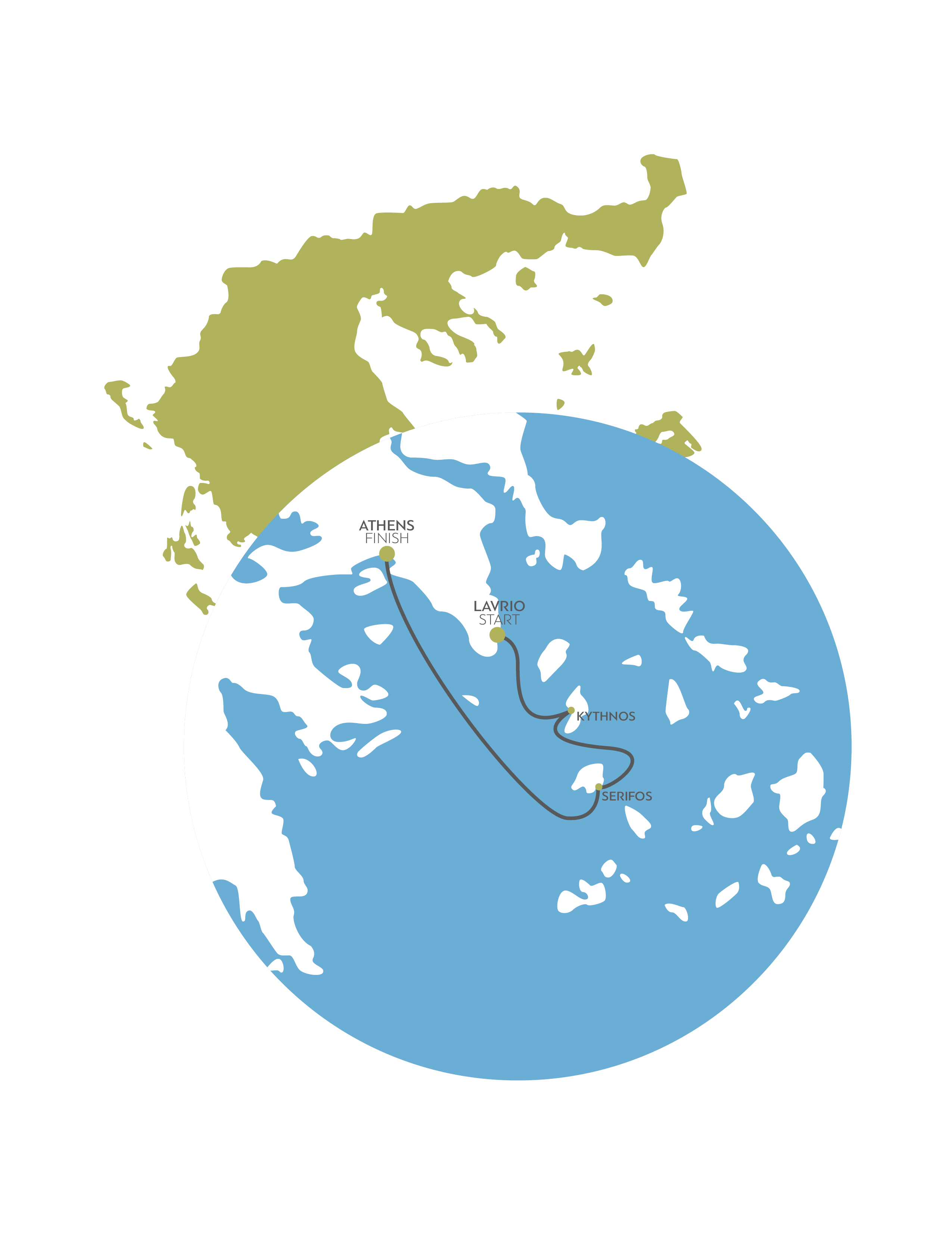 Unspoilt and largely undiscovered by foreign tourists, Kythnos boasts beautiful countryside, is chockful of nature, plentiful sandy beaches, exciting archeological discoveries from the last 10000 years, a Byzantine castle on a spectacular headland, hot springs, traditional villages, music and dancing, good food, and friendly locals. Kythnos is also only two hours by ferry from Lavrio port, which is a half-hour drive from the Athens airport. Geographically close to Kythnos – about an hour on the ferry – Serifos has more daunting hills but otherwise is similar in much of its history, countryside and also boasts many sandy beaches. Its geology includes metal ores and more exotic minerals. The island’s more recent history in the century to the 1960s was be-devilled by rapacious iron ore mining by foreign companies which has left its scars in rusty cranes and machinery in the south-west. The island also saw a bloody strike by mine workers in 1916 over their conditions

On Serifos, walk to the stunning hill-top main town

On Serifos, walk to the stunning hill-top main town

After your arrival on the afternoon ferry, we transfer you to your hotel in the Hora, the island capital. Time for a shower before a walk in the pedestrianised village of Hora to get a feel for the island, its people, and the shape of the surrounding countryside. After an aperitivo, dinner in one of the traditional taverna in the village. At dinner, we meet our guide for Kythnos, Katerina Filippa. She grew up on the island and spends much of her working and family life on the island. She designed the network of paths and hopes to extend it.

Overnight in Kythnos town in a 2* hotel
Dinner included

DAY 2: Hike to Vryokastro ancient city excavation, and back

Our first walk on Kythnos heads from Hora on old mule tracks to the road/track junction of Diassela from where we see the two popular beaches of Episkopi and Apokrousi, sandy and flanked by tamarisk trees for shade. However, our first objective is to walk up to Vryokastro, a 2500-year old ancient city. Excavations have uncovered temples, public buildings, cisterns, a port, and digging makes new findings each summer. Next around to the Apokrousi beach for a swim and lunch. Later in the afternoon we head up a lush valley back to Hora past flowers, sheep and goats, and watch birds of prey overhead.

Overnight in Kythnos town in a 2* hotel
Breakfast and dinner included
Hiking distance:

Again, the walk starts in Hora. We head off towards Loutra port before turning up on first a minor road, then a mule track up to Orias Castle where there are the remains of a Byzantine castle on a headland with sharp drops down to secret beaches, and views across to Kea island. The castle was destroyed by the Turks in 1570, though some churches remain. Back down the hill we pass a 10,000 year-old Neolithic prehistoric site before reaching the port of Loutra, which has a hydrotherapy centre and hot springs running into a corner of the beach. These mineral waters are therapeutic for many ailments.

You transfer to the second main village of the island, Dryopida. The walks starts at the Katafiki cave, one of Greece's largest, which contains stalgmites and stalactites as well as the remains of iron ore mining activities in the last century. After a walk through the pedestrianised village, you head to Panaghia Stou Mathia where there are washhouses used up until the 1970s. You stop at a honey farm and make friends with the bees and their keepers. Honey is an important product of Kythnos. The walk continues to the beautiful Lefkes beach.

DAY 5: Walk via Flambouria beach to Kythnos port and ferry to Serifos

After checking out the Filoxenia, you transfer to Aghios Konstantinos towards the south of the island for a shorter walk down to Flambouria beach on well-crafted stone steps built in the 1960s for mules. The church on the beach is used for weddings, baptisms, and an important religious festival with music in August. From the end of the beach we walk up the hill and over into the valley for Merichas port to catch the ferry to Serifos.

DAY 6: Walk to Hora, across farmland to churches and monastery

Our first walk on Serifos takes us up to the Hora on a well-tended stone pathway that soon reaches the capital’s school, theatre and folk museum before going through narrow streets to the centre of the village with its many craft shops and bars. At the top there are churches with views across the island. Our route continues north on a well-marked trail, past traditional pigeon houses, toward the one-man monastery for a visit and chat with the monk. We transfer back to Hora for an evening out.

After a bus to Hora, you walk the stone path that miners took on their way to an array of mines across the south west of the island. At an intermediate point we also visit the impressive ancient White Tower, which has recently been renovated, before getting onto the mining route to Koutalas bay where ore was loaded on vessels. Then you head to Megalo Livadi where ore was also loaded on ships, there are disused mining offices, and a small museum. This sweet bay also boasts fine fish restaurants.

After a transfer, this walk starts on the northern beach of Sykamia and also ends there. You first go up from the east end of the beach on a mostly well-laid path to the traditional villages of Galani and Pyrgos. The path links via a route through small gardens, and a pretty creek, to Panagia village from where another path descends a lush valley containing a laundry, pigeon houses, watermills, fruit trees and vines. After a swim on Sykamia eat at the restaurant at the western end of the beach.
Later in the afternoon we will hop again on a ferry towards Athens, where our trip ends.