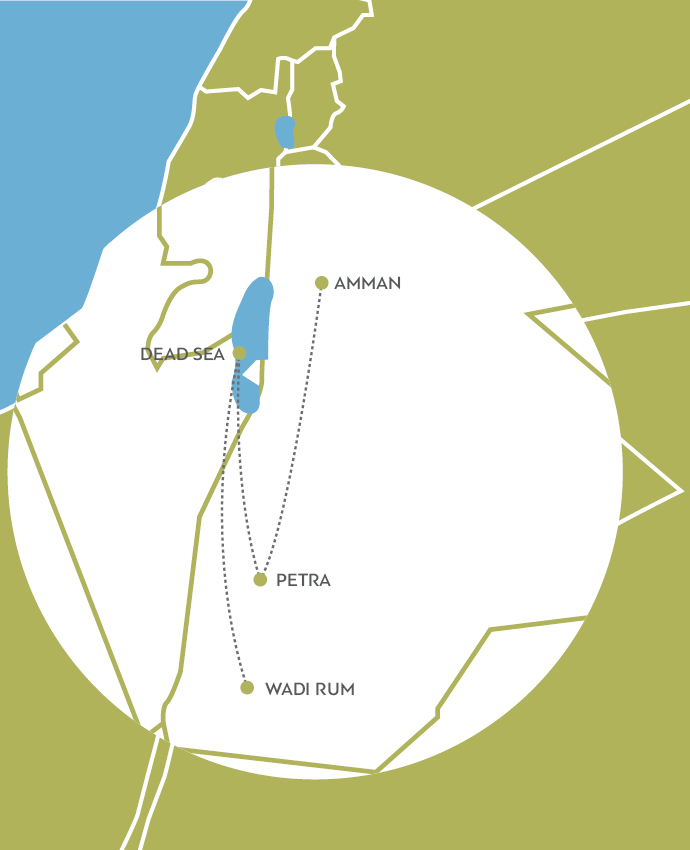 A fascinating mix of natural oddities and ancient wonder, Jordan packs an incredible amount of awesomeness into a small package and has so much to offer for the curious traveler. This oasis of peace in the Middle East, is home to five cities of the Roman Decapolis, five UNESCO world heritage sites and Petra, jewel in the crown of Jordan’s antiquities, which has been declared as one of the “new” Seven Wonders of the world.
Despite its rich heritage, Jordan is not only for history buffs but also a great destination for nature and hiking enthusiasts. Jordanian people are some of the friendliest in the world and the food is to die for. During this trip, step back in time in the sweeping sands of the country, live it up in cosmopolitan Amman, trek to remote hilltop villages, experience the rock-cut magnificence of Petra, explore the mystic desert landscapes in Wadi Rum and float in the mineral-rich waters of the Dead Sea.

Experience the wow-factor of the ancient city of Petra, one of the “new” seven wonders of the world

Float on a sea of salt, at the lower point on earth

Experience the wow-factor of the ancient city of Petra, one of the “new” seven wonders of the world

Float on a sea of salt, at the lower point on earth

Arrive at Amman Airport, where we will meet you, assist with immigration and then transfer you to your hotel. Amman is one of the oldest cities in the world, inhabited since the bronze age. While neighboring medieval cities Damascus and Cairo are steeped in rich antiquity, the city is largely a modern construction but retains its character and history.
In the afternoon we will meet at our hotel and after a brief orientation meeting, we’ll set off to explore this lively city. To conclude the night, we will have our first dinner together in a traditional restaurant while getting to know each other in eager anticipation of our adventure.

DAY 2: Hike from Dana to Mansoura

In the early morning, the group will be picked up from the hotel in Amman for the drive to Dana Biosphere Reserve. Our trekking journey starts with hiking through the diverse landscapes of the Reserve, which includes four distinct ecozones, and is thus accommodating an astonishing diversity of plants, birds, and other animals. First, we’ll follow a trail along the mountains overlooking Dana Valley, and then descend into al-Khashasha Valley where our wilderness campsite awaits us. Sleeping beneath the starts takes on a whole new meaning in Jordan. Deep in the desert far from any contaminating sources of light pollution, the night skies shine with celestial brilliance.

DAY 3: Hike from Mansoura to Furon

According to an ancient Arab proverb, “the deeper you go into the desert, the closer you come to God”. Regardless of your religious or spiritual convictions, Jordans deserts have a magnetic draw that is irresistible to hikers and trekkers.
Well rested, we will leave the campsite in the early morning, and head towards Furon. Today‘s hike is challenging but extremely rewarding. We will start ascending through the mountains for approximately an hour before getting a glimpse of the beautiful Sharah Mountains and the wide Wadi Araba Desert. That outstanding view will accompany you all the way to your campsite in Al Furon. Enjoy a cup of tea and the great view from the campsite while passing the time until your well-earned dinner.

Jordan has been traversed over the ages by countless groups including early hunters and gatherers, Greek soldiers and Roman legions Christian and Islamic missions and nomadic Bedouin. In fact, many of the country’s most famed hiking trails have been laid down over the course of several millennia yet have changed little since the dawn of antiquity
Today we will explore some of the most remote and wildest corners of the country. Contouring the Sharah Mountains, follow a trail of mostly clear Bedouin shepherd paths. The sheer peeks of black mountains overlooking our trail and steep precipitous drops of the canyons below make this day absolutely spectacular. We will gradually climb up the hills to uncover more of the breathtaking views over the desert below before reaching our wilderness campsite in Ghbour Whedat.

Today we will hike towards Little Petra, believed by archaeologist to be a "suburb" of Petra, and meant to house traders traveling along the silk road connecting Africa to Asia, Europe and Arabia. Along the way we will pass Bedouin camps, sheep pens, and Nabatean ruins, some of which may include wine and olive presses, aqueducts and other ancient water infrastructures. When we reach Little Petra, we will see rock carved facades, houses and other ancient buildings carved into the sandstone canyon.

There’s nothing else like Petra, a city of rose-colored stone, carved out by the Nabataeans in the 3rd century BC and voted one of the New Seven Wonders of the World.
After breakfast it's time to start your hike towards there and enter via ‘The Back Door’ avoiding most of the tourists. We will follow pleasant tracks amidst sandstone mountains, which guard the approaches to Petra and eventually a Nabataean route out of the valley and towards a natural rock terrace which has been ‘improved’ for the safety of walkers. Even so, it still narrows slightly before reaching a hidden plateau high above the impressive chasm of Wadi Siyyagh. Just beyond, carved into the cliff face, ‘The Monastery’ suddenly comes into view. Nabataean steps will lead us down into ancient Petra, passing ‘The Treasury’ and through the famous ‘Petra Siq’ to Wadi Musa.

Like the surface of Mars, the vast and beautiful Wadi Rum desert is a captivating quiet and empty place. And that’s part of the charm. In the morning after breakfast, drive from your hotel in Petra and head there, where you will be taken on a jeep tour that will allow you to travel around Wadi Rum’s valleys, rolling dunes, and deep gorges. The jeep will drive back to your camp where you will enjoy the silence, the stars and the night in the desert.

DAY 8: Float in the dead sea and farewell dinner

After breakfast, you will proceed to the Dead Sea, the lowest point on earth. Once you arrive, you can enjoy floating in the Dead Sea, one of the world’s great natural experiences. Floating is the right word for it; with an eye stingily high salt content it is virtually impossible to swim in the viscous waters of a sea that is 415m below ‘sea level’. After floating, trying out the "magical" Dead Sea mud and soaking up some sun, you will head back to the capital.

DAY 9: Say farewell in Jordan or continue on your own

Breakfast is at your leisure at the hotel and following that, your Tripin Adventures trip in Jordan concludes. There is going to be a transfer from our accommodations in Amman to the international airport for return flights home or you can continue your explorations of this marvelous country.

Request a reservation for this trip or build your own.
Our travel experts...