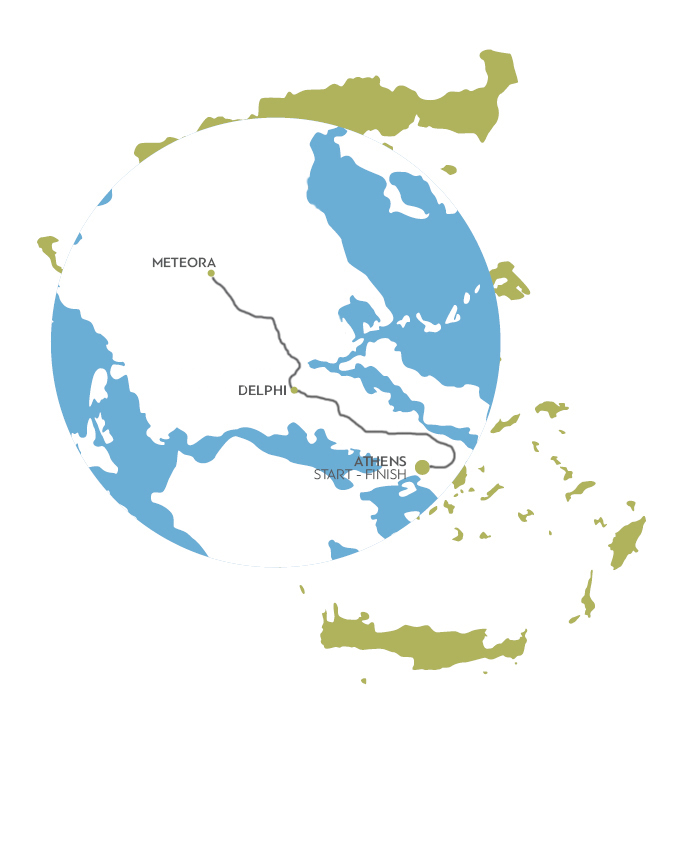 If all you have is just three days and you are trying to decide where to go before you head to the islands, this tour combines two of the most famous landmarks of Greece, Delphi and Meteora.
Our trip starts from Athens, and on the way to Delphi the road cuts through some of the most beautiful mountain scenery in Greece, passing traditional villages that are among the country’s loveliest. Delphi is perched in a cliffside on the slopes of Mount Parnassos and overlooks the fertile valley of Phocis, dominated by the silvery-green Olive Grove of Amfissa and the sea. It was considered from the Ancient Greeks as the navel of the world and to honor it, they built here the sanctuary of Apollo. Pilgrims came to Delphi for throughout the Greek world, to seek wisdom from the oracle of Pythia.
Our next stop is Meteora, one of the most extraordinary places in the world. A series of sandstone pinnacles, rising above the plain of Thessaly. It is not surprising that they have been seen as places of religious retreat and the monasteries built by monks six hundred years ago on the top of these rocks, create a unique synthesis of nature and man.

Be amazed by the Unesco World Heritage listed site of Delphi, one of the best preserved ancient monuments

Hike on cobblestone paths, following the footsteps of pilgrims who have walked on them for centuries

Be amazed by the Unesco World Heritage listed site of Delphi, one of the best preserved ancient monuments

Hike on cobblestone paths, following the footsteps of pilgrims who have walked on them for centuries

DAY 1: Drive to Mt Parnassos, hike the ancient path that was connecting Corycian Cave and Delphi and visit the archaeological site

We depart early from Athens and drive towards mount Parnassos. Covered by thick forests, with habitats of high biodiversity value, Parnassos was the first Greek mountain to be proclaimed a National Park. Our hike starts just below Corycian Cave, which was dedicated to the God Pan and it was a place for pagan rituals since Neolithic times. We follow the same path that ancient pilgrims used to take in order to approach the cave from Delphi oracle. It descends the southwest part of Parnassos mountain, within a dense fir forest and great views of the sanctuary of Delphi and the olive grove of Amfissa, the biggest in Greece, with more than one million trees. We finish at the village of Delphi where we lunch, as Greeks, tasting the traditional “meze” dishes.
The day continues as we visit the archeological site of Delphi, symbol of unity of the ancient Greek world and its most prestigious religious center. Alongside with your guide you will explore the archaeological site and the archaeological museum without the morning crowds.

Overnight in Delphi in a boutique hotel
Lunch and dinner included
Hiking distance:

DAY 2: Drive to Meteora and hike there

We leave the mountainous village of Delphi to transfer to magnificent Meteora, and It is not likely to forget the first moment the rock pinnacles come into view. One moment you are driving through the fertile plains of Thessaly and the next you are at the base of a gigantic “stone forest” that rise impressively above the ground. They represent a unique artistic achievement and are one of the most powerful examples of the architectural transformation of a site into a place of retreat, meditation and prayer.
By far, the best way to appreciate the power of the natural forces that shaped this breathtaking landscape is walking right into it. Fantastic manifestations of geological history and current processes of nature await you around every bend or rise in the trail.

Overnight in Kastraki in a boutique hotel

DAY 3: Hike in Meteora, visit one of the monasteries and drive back to Athens

The world Heritage listed Meteora is an extraordinary place, a testament to the harmonious coexistence of man and nature. After admiring the iconic architecture of the monasteries from outside, we get in to find out the secrets of the monastic life. The monasteries are like museums as they host a wide selection of precious icons, wall- frescoes, relics and other treasures from the Byzantine times.
In the morning we will hike towards one of the monasteries and after having lunch in the village of Kastraki, we will drive back to Athens, where your trip with Tripin Adventures in Greece concludes.

AND BOOK YOUR TRIP

FROM APRIL TO OCTOBER

We are constantly updating our unique itineraries based on new information and experiences available. The walks, accommodations, and visits listed may be adjusted. The itineraries presented are subject to modification and change by Tripin Adventures. We reserve the right, without penalty, to make changes in the published itinerary whenever, in our judgment, conditions warrant, or if we deem it necessary for the comfort, convenience, or safety of participants.