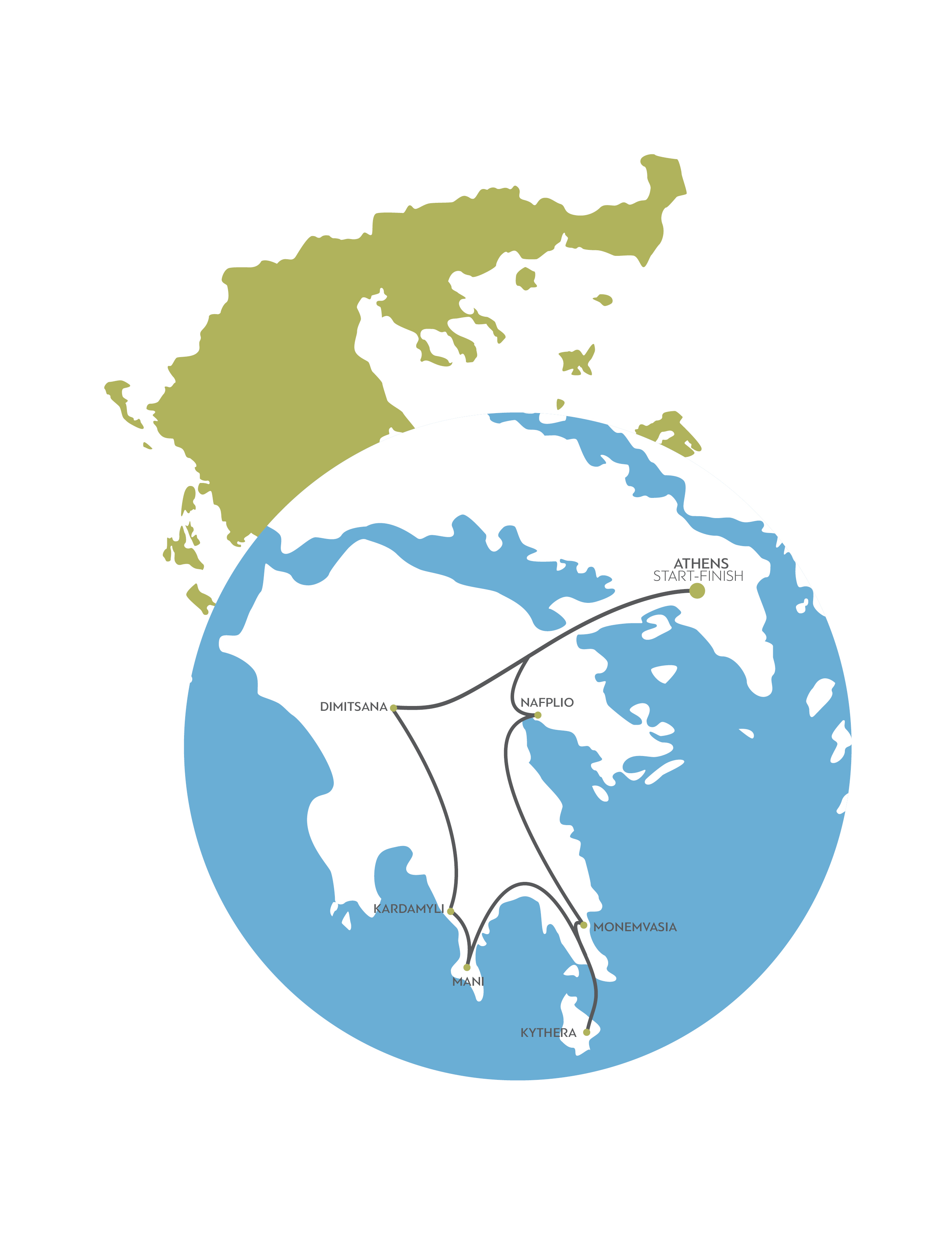 The Peloponnese is the land of legends. This stunning yet little explored peninsula in south-west Greece was the playground of ancient gods and the inspiration for Homer's epic Iliad. It is here where the Olympic Games were founded, and the legendary wars of Sparta were fought. Dotted with ancient ruins, and clifftop castles, the region also boasts picturesque guesthouses on some of the Mediterranean's most beautiful beaches.
This trip aims to reveal Peloponnese’s gems. We start in Athens and we drive towards the prefecture of Arkadia, a tangle of medieval villages, remote monasteries, precipitous ravines and narrow roads that wind their way through the valleys of the Menalon Mountains. Here we are going to hike for on the historic trail along the scenic Lousios river.
Next stop is Kardamyli, where the British author Patrick Leigh Fermor chose to spend a great part of his life. In the following day we will explore the wild and barren landscape of Mani, which forms the southernmost tip of mainland Greece and really does feel like the end of the road.
After Mani, we will drive to Neapoli, and from there we will hop on our ferry to Kythera. Lying on its own at the bottom of the Peloponnese peninsula, this island has managed to preserve it’s cultural identity and it’s impressing natural sceneries of fertile valleys, waterfalls and pristine beaches. Heading back to Peloponnese we will first visit Monemvasia, the Greek equivalent to France’s Mont Saint-Michel, and the next day on our way to Nafplio, which is graced with attractive narrow streets and elegant Venetian architecture, we will have a look at the past, in the ruins of the Byzantine city of Mystras.

Meander through the magical Mycenae, a World Heritage listed site

Sample local dishes that pay tribute to the rich gastronomic tradition of the region, and gain insight to the philosophy of the fresh local products

Meander through the magical Mycenae, a World Heritage listed site

Sample local dishes that pay tribute to the rich gastronomic tradition of the region, and gain insight to the philosophy of the fresh local products

DAY 1: Drive to Arcadia and hike in Lousios gorge

In the morning we depart  from Athens and we will head towards Arcadia prefecture, where we going to hike part of the Lousios gorge. The hike starts from the isolated monastery of Prodromos, which is built into the side of a rock and looks absolutely stunning, the path unfolds in parallel with Lousios, a river with crystal clear waters that runs through an incredibly steep gorge towering up above you. The path is finishing back to Dimitsana, and just before entering the village we will do a stop to visit the Open-Air Water Power Museum, a thematic museum which highlights the importance of water-power in traditional society. Focusing on the main pre-industrial techniques that take advantage of water to produce a variety of goods, it links them to the history and daily life of the local society over the ages.

Overnight in Dimitsana in a boutique hotel
Lunch and dinner included
Hiking distance:

DAY 2: Drive to Kardamyli and hike

Today we will drive towards Kardamyli. This tiny village is located in one of the prettiest settings in the Peloponnese, nestled between the blue waters of the Messinian Gulf and the Taygetos Mountains. Hiking has become Kardamyli’s greatest drawcard, as the hills behind the village are crisscrossed with an extensive network of cobblestone paths, hidden among the coastal flora. Our path starts at the old quarter of Kardamyli and soon passes the so-called Tombs of the Dioscouri, the alleged burial spot of Castor and Pollux. The two rock-cut tombs are probably Mycenaean in origin. A half-hour uphill finds us by the church and the outskirts of the village of Agia Sophia. The views from here back down to Kardamyli are more than worth the effort. Walk through stunning landscapes of villages, olive groves and wild flower fields all the way down to a gulf where Patrick Leigh Fermor lived.
In the afternoon put on your bathing suits and take a refreshing swim in the turquoise waters, in one of the idyllic beaches around Kardamyli.

Overnight in Kardamyli in a boutique hotel
Breakfast, lunch and dinner included

DAY 3: Drive to Mani and hike to Diros caves

Next stop: Mani, a vast, mountainous piece of land, wild and windswept. It feels like the end of the road, stark and sparse. Its inhabitants, known for their toughness, hid out in the folds of the mountains, far from the coast marauding pirate ships.
In the morning we will hike through fields and olive groves in the area around Areopoli, the capital of Mani having acquired its name from the ancient Olympian god of war Aris. During the walk we will encounter many famous Maniot Towers, military hallmarks of a glorious era. These fortifications are an expression of the fighting spirit of the region and they were the center of life in the world of Mani.The highlight of the hike though, is the visit to Diros caves, one of the most extraordinary caves in Greece. The crystal-studded stalactites and stalagmites are spectacular, in shades of rose, green, amber, black, blood red, and purple. They are one of the oldest inhabitant spots in Greece, but were abandoned after an earthquake in 4 BC and weren’t rediscovered until 1895.

DAY 4: Ferry to Kythera and hike from Kapsali to Chora

Located in the crossroad of the Aegean and Ionian seas, the island of Kythera lies just off the southern tip of the Peloponnese’s Lakonian Peninsula. With its population of fewer than 4000 spread between 40 villages, Kythera it's an unspoilt island of lush valleys, deep gorges, crystal clear waters and medieval settlements.
In the afternoon, we will hike from the village of  Kapsali to Chora, the capital of the island which is set on a hill above it. It is one of the most beautiful villages of the Aegean that stands out for its architectural blend of Cycladic, Venetian and Cretan architecture. Before completing the loop walk to Kapsali, we will explore its white-washed lanes up to the Venetian castle with stunning views over to Hyrta, a sea-girt rock that lays claim to being the birth place of Aphrodite.

The mountainous village of Mylopotamos, is one of the most beautiful medieval villages of the island and it is famous for its waterfall. Our path starts from the village square and we follow the river down the gorge past the ruins of numerous mills that once ground the local wheat and numerous waterfalls. We end up in the castle of Kato Chora, one of the most significant monuments of the island, which was built by the Venetians in 1565 A.D. Inside one can admire the layout of the two-story houses and part of fortified walls, as well as a large number of Byzantine churches.

DAY 6: Ferry to Neapoli and drive to Monemvasia

In the morning we will take the ferry back to Peloponnese and then we will drive towards Monemvasia, a Gibraltar-like rock, which forms a small island linked by a bridge, with a medieval village at its base. The village is enclosed within the walls of a castle, with narrow, cobbled streets, flanked by winding stairways that weave between a complex network of stone houses.
In the afternoon we will explore the medieval village,hike around the rocky hill, and finally ascend to the citadel of the town. From there we will enjoy the truly spectacular views down to the red-tile roofs of Monemvasia, out across the sea and deep into the mountains of the Mani peninsula.

DAY 7: Hike next to Mystras and drive to Nafplio

Today we will drive from Monemvasia towards the fortress town of Mystras with the captivating ruins of churches, libraries, strongholds, and palaces is another Peloponnese UNESCO World-Heritage listed site, and we will walk from the tiny village of Parori, located on the eastern slopes of Taygetos, to the church of Panagia Zagouna, which is located within a large cave. From there we will walk to the monastery of Faneromeni, and then we will descent the dramatic Langadiotissa gorge, through a curved path in the rock to the cave church of Panagia Laggadiotissa with the 14th century frescoes, and eventually the village of Parori.
In the afternoon we will head to Nafplio, the town where Greece meets Italy. Built with stepped streets overhung with balconies dripping bougainvillea, handsome neoclassical buildings and enticing shops and restaurants, it is the most charming town in the Peloponnese.

DAY 8: Visit Epidaurus and Mycenae and drive back to Athens

Epidaurus, is the best-preserved theater of Ancient Greece, and the place were Aeschylus, Euripides and Sophocles presented their tragic poets. Every single summer people still return to see the same plays, a genuine testimony of the Greek culture that it is still alive. We will spend the morning visiting the archaeological site, which was also famed and revered as a place for miraculous healing. After that, we will drive to the World heritage-listed Mycenae, one of the most ancient places in Europe, and as you walk through the 13th-century BC Lion Gate, it’s easy to sense that the ancient Greek myths have a strong connection with reality.